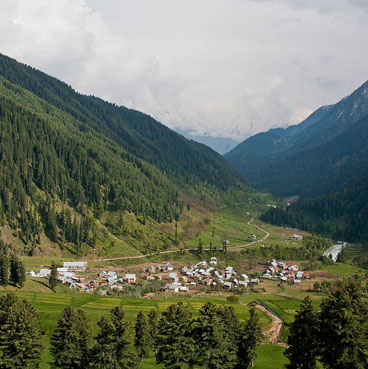 Aru is small village, 11 kms upstream the Lidder River, is a beautiful locality. The route is picturesque with ample campsites. This village is the starting point for treks to the Kolahoi glacier.

This charming meadow can be reached by walking along a mountain path. The river Lidder disappears at Gur Khumb and reappears after 27 mts.

Situated 2130m up at the convergence of the streams flowing from Sheshnag Lake and the Lidder River, Pahalgam was once a self-effacing shepherd's village with breathtaking views. Now it is Kashmir's leading resort, cool even during the height of summer when the maximum temperature does not exceed 250C. Around Pahalgam are many places of interest, and because the resort is set between fairly steep hills, it is worth hiring a pony rather than walking. Horse fares are posted at prominent locations.

The most beautiful of the nearby locations is the huge, surging meadow of Baisaran, surrounded by thickly wooded forests of pine. Hajan, on the way to Chandanwari, is an pleasant spot for a picnic. Filmgoers will recognize it instantly as it has been the location of several movie scenes.

Pahalgam has within it no fewer than eight tiny villages, one of which is Mamal. There is a Shiva temple here, generally considered to be Kashmir's oldest offered temple, dating to the 5th century.