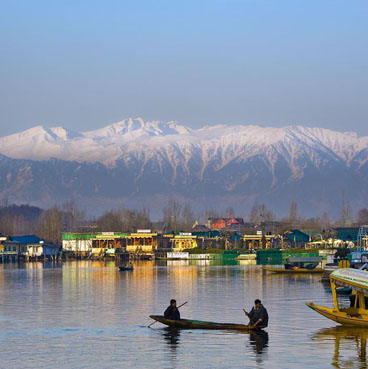 Srinagar is the heart of the Kashmir Valley, still preserves the imprints of the Mughals and the British. The valley takes great pride in its lakes, gardens and the charming rows of houseboats floating on them. Popular for traditional Kashmiri handicrafts, kashmiri clothes and dry fruits, Srinagar is bordered by five districts. To its northern side is Kargil, in the south is Pulwama and in the north-west lies Budgam. "If there is a heaven on earth, it's here, it's here, it's here", exclaimed the Mughal emperor Jahangir on his first visit to this place.

Srinagar has the privilege of having a multifaceted and unique cultural blend, making it different from the rest of the country, not only from the cultural front, but in point of geography, demography, ethics and social entities. as well. With its beautiful picturesque Himalayan backdrop, the crowning glory of hill stations Srinagar is enticed by the colourful houseboats , shikaras and the grandeur of Mughal sense of style.

Sri means Lakshmi or wealth and 'nagar' a city. The summer capital of J&K State, Srinagar city has a vital role in the history of Kashmir. For this reason, Persian chronicles call it Shehr-e-Kashmir or 'City of Kashmir'.

Founded by the King Pravarasena II over 2,000 years ago, Srinagar owes its name to two Sanskrit words, Sri (meaning profusion and wealth) and Nagar, (meaning a city). Dating back to the 3rd century BC, the city was formerly a part of the Mauryan Empire, which once happened to be one of the most important empires of India. This region prospered quite well under the rule of the Kushans in the 1st century AD. During this period, it used to be an important Buddhist pilgrimage site. In the 6th century, however, it became a part of the kingdom of Vikramaditya, the ruler of Ujjain. Local Hindu rulers ruled it until the 14th century, when Muslims rulers invaded and captured it. With the downfall of the Mughal Empire the fortunes of the area swung dramatically. In 1814, it went to the Sikhs, when Ranjit Singh got the better of the Pathans. However, ultimately the British defeated Ranjit Singh and in accordance with the treaty of Lahore in 1846, they appointed Gulab Singh as the autonomous ruler of Kashmir. Later, Hari Singh, the great grandson of Gulab Singh, united this huge state into India in 1948, when the Pathan intruders from Pakistan tried to capture this state.

The city is located on both the sides of the Jhelum River, which is called Vyath in Kashmir. The river passes through the city and meanders through the valley, moving onward and deepening in the Wular Lake. The city is famous for its nine old bridges, connecting the two parts of the city.

The Mughal Gardens: With terraced lawns, cascading fountains, paint-box-bright flowerbeds with the panorama of the Dal in front of them - the three Mughal Gardens of Chesmashahi, Nishat and Shalimar are the Mughal Emperors' concept of paradise and are today very popular places for picnics and excursions. The beauty of these gardens is at their best during spring but the Mughal structure of these gardens lends them a unique sense of beauty even when the flowers are not blossoming. They consist of mainly the following three gardens:

Chashmashahi is the smallest of the three Mughal gardens of Kashmir. Meaning Royal Spring, this garden measures 108 m by 38 m and is above the Nehru Memorial Park. Mughal Emperor Shah Jahan set up the Kashmir Chashma Shahi Mughal Gardens in 1632 AD. The garden is quite famous for spring of energizing digestive mineral water inside it. Chasma Shahi Garden of Kashmir, India, offers a striking view of the scenic Dal Lake and the neighboring mountains. The garden has a number of terraces, with several fountains built right through its center.

Nishat garden is the largest one of the Mughal gardens in Kashmir. It is situated on the banks of the picturesque Dal Lake. Also known as "the garden of bliss", the Nishat gardens have the Zabarwan Mountains forming its backdrop. Asaf Khan, the brother of Nur Jahan, designed the Kashmir Nishat Bagh in 1633 AD. Within the garden are ruins of some of the buildings dating back to the Mughal period. One of them is a double story pavilion enclosed on two sides with latticed windows. There is also a small spring behind the garden, known as Gopi Tirth. It is a source of supply of crystal clear water to the garden.

Emperor Jehangir got the Shalimar Garden built for his wife Nur Jahan in 1616. A second garden Faiz Baksh, (The Bountiful) was added to it later during the reign of Mughal Emperor Shah Jahan (1628-1658). Covering an area of approximately 539 m by 182 m, the Shalimar garden offers an amazing view over the other gardens, lakes and shallow terraces. Also known as the "garden of love", the Shalimar Mughal Gardens has four terraces, rising one above the other. The fourth terrace of the garden was, at one point of time, reserved for royal ladies. There is also a canal lined with polished stones running through the center of the Shalimar Bagh. The canal is responsible for supplying water to the garden from Harwan.

Dal Lake: The Dal Lake is unique for its beauty that lies in its pulsating surroundings, since it sustains a life on waters not found anywhere else in the world. The houseboat and Shikara communities have survived on the Dal for centuries and every thing is found on and nearby the houseboats including doctors, tailors and bakers in tiny wooden shops on the lake.

Hari Parbat :Crowned to greatness by the ruins of a fort, the Hari Parbat hill, according to legends, grew out of pebble stones dropped by Parvati the Hindu Goddess while trying to defeat a demon. Though today it is no more than rubble, the thick massive wall around the fort is an imposing evidence of a historic past. Over the centuries, the vicinity of the hill has seen several temples being erected in the name of its past glory.Hari Parbat is located on the boundary of Srinagar city. This is an ancient and one of the most religious places in the state of Kashmir. This place is considered to be the abode of Mahashakti (the Divine Mother Jagatamba Sharika Bhagwati). This goddess is also called as Rajrajeshwari or Maha Tripursundhari. Locally, people refer to this goddess by the name 'hari.'

Shankaracharya Mandir. is a Hindu temple dedicated to Lord Shiva on a hilltop. It can be reached by a car or taxi. For security reasons, no cameras or cellphones are allowed within the temple and you are supposed to leave them in the vehicle before entering the temple premises. Cigarrates, liquor are to be deposited with the police personnel before the ascent of the hill as these items are against Hindu religion.

The Hazratlbal Shirne:Situated on the left bank of the famous Dal Lake, the shrine has unmatched reverence for the Prophet Mohammad.

Nagin Lake:It has some of the most luxurious deluxe houseboats. This area is preferred by people looking for calm and quiet environment. For this reason, foreigners find it more interesting to stay at Nagin Lake. The Lake is approachable by road through the old city and fore-shore Road alongside the Dal Lake. Shikara ride in this placid lake is a memorable experience.

In Srinagar water skiing is a favorite sport among tourists during summer. Motor launches with ski boards are available on hire. During the winter season, migratory birds float in the lake making it a magnificent scene. Srinagar lake offers splendid colours and moods with every change in the weather that mesmerizes the visitors and locals too. Dal is a photographers delight.

There are nice leather products, or jewellery.Cashmere (Pashmina) shawls have been manufactured in Kashmir for thousands of years. Pashmina Shawls are very popular items for sale in the ValleyThere are also embroidered felt mats called Namdahs but the colours of the wool may be a bit too bright in most shops.There are also chainstitch rugs in two styles - English design or Kilim design Carpets and Paper Machie products are also quite unique to Kashmir with colourful motifs and design on them. They are seen everywhere and resemble pottery in shape and design.

We have a number of restaurants and cafes in Srinagar, Nun Kun at Nehru Park, Wazwan at Kashmir Residency (TRC), Zaiqa Rstaurant Hotel Heemal, Zaiqa Restaurant inside Nehru Park, Zaiqa Floating Restaurant at Char Chinari, Zaiqa Restaurant at Cheshma Shai, Zaiqa Restaurant inside Mughal Garden Nishat. Most of these are located on Boulevard Road along the banks of the Dal Lake. Most of our restaurants will serve Kashmiri, Indian, Mughlai and 'Indianized' Chinese dishes and pure vegetarian dishes. Make sure you try dishes like Rogan-gosht (meat cooked in red gravy), Gushtaba (soft meat balls cooked in natural yoghurt), Tabakmaaz(deep fried ribs of a lamb) and Kanti (small chunks of meat cooked with a lot of onions). Another popular local delicacy is called seekh-tuji. It consists of marinated meat pieces which are freshly barbecued and eaten with chutney available at some of our restaurants, Enjoy the grilled mutton available in Srinagar.

We have more than 1200 Rooms Capacity only in Srinagar.
1.Beautiful Huts (Cottages) at Cheshmashai which commands a magnificent view of the Dal Lake below and its surrounding Zabarwan Mountain range.
2.Hotel heemal situated on the bank of Dal Lake enjoys the reputation of being one of the best hotels in Srinagar.
3.Hotel Kongposh double bed deluxe rooms from where the city centre and Dal lake is at a walking distance.
4.Kashmir Residency (TRC) is right in the heart of Srinagar City.

How to reach Srinagar is not difficult, as the city has good air, rail and road connections.
Airport : The domestic airport of Srinagar has regular flights of Indian Airlines and Jet Airways connecting to Delhi and Mumbai.
Railway : Jammu, at a distance of 290 km, is the closest railhead from Srinagar. There are regular express trains to Jammu from cities like Delhi, Mumbai and Kolkata.
Road : By road, Srinagar is very well connected to places like Chandigarh (630 km), Delhi (876 km), Jammu (290 km), Leh (434 km), Gulmarg (48 km), Sonamarg (88 km) and Pahalgam (96 km).